Welcome to the second of ‘WHAT’S IN SOUTHEAST ASIA?‘ blog series.

Last week I posted about Brunei and a very quick tour about it, which is what you could do in Brunei.

Now, I’m gonna show you the second country to see in Southeast Asia, which is Cambodia!

You might know that from my previous post, I was talking about moving and currently I living in Cambodia, Poi Pet City ( a border city between Thailand and Cambodia). This city is most known by a lot of tourist’s fraud, and I’ve had experienced it once, when it was my first time here. So, just be careful when you wanted to go to Thailand by bus or train from Cambodia and so from Thailand to Cambodia. Because you will cross through this border.

Cambodia is a country located in the southern portion of the Indochina Peninsula in Southeast Asia. It is 181,035 square km (69,898 sq mi) in area, bordered by Thailand to the northwest, Laos to the northeast, Vietnam to the east, and the Gulf of Thailand to the southwest.

Cambodia also officially known as the Kingdom of Cambodia,  a constitutional monarchy with Norodom Sihamoni, a monarch chosen by the Royal Throne Council, as head of state. The head of government is Hun Sen, who is currently the longest serving non-royal leader in South East Asia and has ruled Cambodia for over 25 years.

Cambodia’s official language is Khmer with official religion is Theravada Buddhism, practiced by approximately 95 percent of the population.

What can you do in Cambodia?

In this Cambodia’s tourist spot, I’m gonna show you, 3 famous cities where a lot of tourist come and chilling in Cambodia.

NB: Cambodia using Riel as their currency, but at some point they also using USD (Tourist influence).

A capital city of Cambodia, sits at the junction of the Mekong and Tonlé Sap rivers. It was a hub for both the Khmer Empire and French colonialists. On its walkable riverfront, lined with parks, restaurants and bars, are the ornate Royal Palace, Silver Pagoda and the National Museum, displaying artifacts from around the country. At the city’s heart is the massive, art deco Central Market. Just like another metropolitan city, Phnom Penh has a lot of big buildings adorn the city. There are four places in Phnom Penh that really captivated by a lot of foreigner when they’re visiting Phnom Penh, Cambodia.

They are two famous traditional market that everyone knew they need to get their ass there for a snack treat or buying a gift. Central Market or known as Phsar Thmei, sell a lot of gifts and groceries. It is an actual traditional market, where fish, chicken, rice, ect are sell for money. Well everything is sell for money, but this market is spreading it’s profit into gift shops. So, don’t be surprised if they are a lot of people asking you to stop by their shop when you walk through it.

While in Kandal Market, you could find a lot of street foods whose ready for you to buy it.  Many Cambodians do still not use refrigeration so goods are bought and consumed the same day. The scenes where you buy your goods at home and they buy theirs are indeed a contrast! The vendors sell freshly picked fruits and vegetables usually on the outer areas of the market while the inside area of the Kandal Market has all sorts of meats spread out on wooden benches and tables in the open air.

When you’re going to both market (not that far, just walking for a few blocks between both market), the best time to visit is around 08:00am to 09:30am in the morning to get the most out of it. This is the coolest time of day and also very active and interesting.

Since Cambodia is ruled by the king, palace is the most important thing that every king need. Cause it is his place or his home and everything always happening there for big ceremony or something connected with the king’s matter. The fact is, almost all Southeast Asia countries are ruled by king in the past and some are still. Which is not a surprise, if we (Southeast Asian) have a lot of palace and dozens of history.

Royal Palace is located in the central of Phnom Penh, which is old citadel called Banteay Kev. It faces towards the East and is situated at the Western bank of the cross division of the Tonle Sap River and the Mekong River called Chaktomuk. The Royal Palace contains some spectacular buildings. Not least of which is the Throne Hall, situated to the left of the main entrance. It boasts a 59-meter tower. The tower roof is beautiful, having been decoratively tiered with golden coloured tiles. This building is used for high official celebrations, coronations and audiences with foreign dignitaries and government officials.

Gleaming in gold, the Royal Palace is one of Phnom Penh?s most splendid architectural achievements.

As a part of Royal Palace, Silver Pagoda is one of the heritage site in Phnom Penh that really attract a lot of tourist to visit. The Silver Pagoda is located on the south side of the Royal Palace, Phnom Penh. Formerly, it was known as Wat Ubosoth Ratanaram. The temple’s official name is Preah Vihear Preah Keo Morakot which is commonly shortened to Wat Preah Keo in Khmer.

Sharing the pagoda are many other interesting artifacts and jewels and was one of the few temples to remain intact during the Khmer Rouge regime. The Silver Pagoda complex is enclosed by walls plastered with an extensive mural depicting the classic Indian epic of the Ramayana (known as the Reamker in Cambodia). The story begins just south of the east gate and includes vivid images of the battle of Lanka. The mural was created around 1900 and is definitely showing its age in parts.

Hearing the name as a tourist’s spot is kind of weird, because it is more like a funeral or memorial where a big tragedy happened in Cambodia. The story of Killing Fields is really something and very devastating to hear such a cruel regime once in the past.  Tuol Svay Pray High School sits on a dusty road on the outskirts of Phnom Penh, Cambodia. In 1976, the Khmer Rouge renamed the high school S-21 and turned it into a torture, interrogation and execution center. Of the 14,000 people known to have entered, only seven survived. Not only did the Khmer Rouge carefully transcribe the prisoners’ interrogations; they also carefully photographed the vast majority of the inmates and created an astonishing photographic archive.

To going to Killing Fields & S21, there’s a Shuttle Bus Tour available in Phnom Penh. The tour will start when all hotel pick-ups are completed. The bus will take you to Prison S21 first. Recorded English commentary will be played on the bus, giving you some basic background about this prison. The bus attendant will explain some guidelines about the visit. Audio guide is available in 15 languages at the museum for $3 per person; in-house guide can be hired as well for USD $2/person. 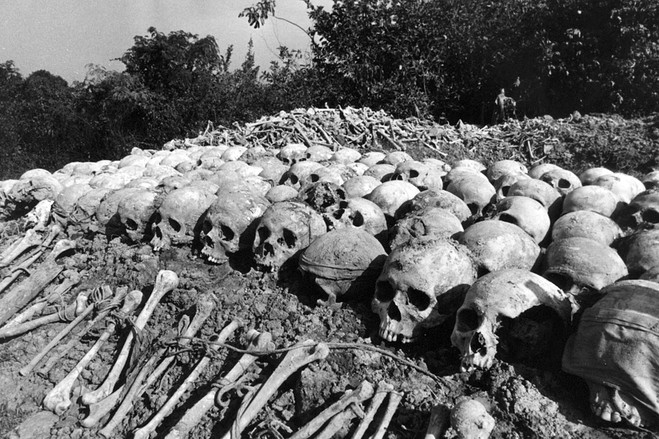 Some people said that, the genocide in Cambodia is much worse than the Nazi. From what I think, they both are the worse and nothing to compared of for killing people. Because it’s not worth it and nothing to be proud.