Welcome to the fifth of ‘WHAT’S IN SOUTHEAST ASIA?‘ blog series.
Last week I posted about Indonesia and there’s 2 post about it cause I have so many words to described Indonesia and even still I need more actually. But it’s time to moving on to another Southeast Asia country. So, I’m gonna show you the fifth country to see in Southeast Asia, which is Laos!

According to WIKIPEDIA
Laos, officially known as the Lao People’s Democratic Republic (Lao PDR), is one of the poorest nations in Southeast Asia. A mountainous and landlocked country, Laos shares borders with Vietnam to the east, Cambodia to the south, Thailand to the west, and Myanmar and China to the north.

According to the anti-corruption non-governmental organisation Transparency International, Laos remains one of the most corrupt countries in the world. This has deterred foreign investment and created major problems with the rule of law, including the nation’s ability to enforce contract and business regulation. This has contributed to a third of the population of Laos currently living below the international poverty line. According to the Global Hunger Index (2015), Laos ranks as the 29th hungriest nation in the world out of the list of the 52 nations with the worst hunger situation. Laos has also had a poor human rights record.

The English word Laos was coined by the French, who united the three Lao kingdoms in French Indochina in 1893, and named the country as the plural of the dominant and most common ethnic group, which are the Lao people. (In French, the final “s” at the end of a word is usually silent, thus it would be pronounced “Lao”).

To get to Laos, you have 3 choices such as by airplane (where the airport located in Vientiane and Luang Prabang), by train (catch a train from Bangkok, Thailand and it takes around 5-6 hours. After that you’ll stop at the border between Thailand and Laos. From there you need another transportation to get to Vientiane (Laos, capital city) and mostly a third-wheel motor bike/ Tuk Tuk is the only transportation comfortable to use), the last one is by car or motorbike (where you rent it from Bangkok or Vietnam or Cambodia (the place you’re starting at) or join the tour).

My recommendation about transportation is better you catch a train to go to Laos. Because it will saving your budget and you’ll meet a lot of people, a lot of backpacker and enjoying the view.

What can you do in Laos?

Laos has a rich history stretching back 10,000 years. At its height, it ruled over present day Laos and much of neighbouring northern Thailand. Landlocked and laid-back, it’s a unique spin on the Southeast Asia experience. Here Buddhism permeates every facet of life, change comes slowly, and cities bed down early. The perfect place to break from office politics or put a pause in a hyperactive travel agenda, this land of mountain, mists and untamed natural beauty tempts with unrivalled peace and serenity.

Luang Prabang, the ancient capital of Luang Prabang Province in northern Laos, lies in a valley at the confluence of the Mekong and Nam Khan rivers. Inhabited for thousands of years, it was the royal capital of the country until 1975. It’s known for its many Buddhist temples, including the gilded Wat Xieng Thong, dating to the 16th century, and Wat Mai, once the residence of the head of Laotian Buddhism.

Before Vientiane, Luang Prabang was the ancient royal capital of the Lan Xang Kingdom until King Phothisarat moved the administrative seat to Vientiane in 1545. Regardless, it has continued to overlook Vientiane as the destination of choice with its amalgamation of crumbling French architecture, glistening temples and extensive natural beauty. Even the hardest of hearts would have a struggle not to warm to the place. 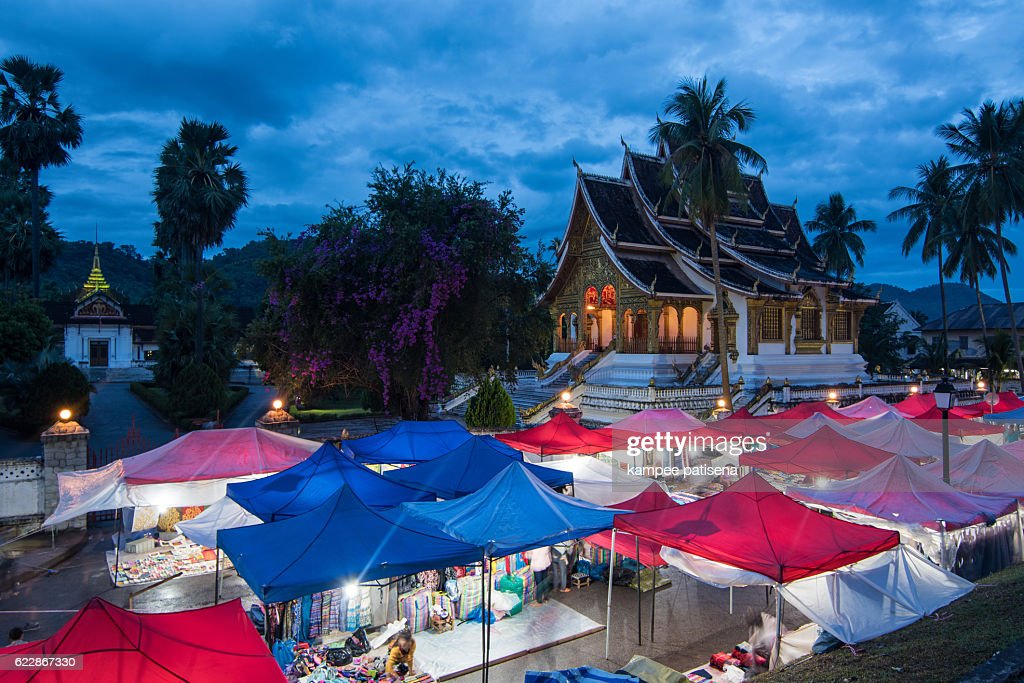 The town’s entire historical section is dedicated to tourism, with everything from former royal palaces to over 33 Wats (temples), on the tourist trail. This former Royal capital still remains the main centre for Buddhist learning in Laos and is the perfect location for spiritual contemplation. Because of it’s beauty and historical, Luang Prabang is now one of UNESCO World Heritage City.

It’s not a surprise if you meet a lot of foreigner, bar, club or even a beautiful night market in Luang Prabang. 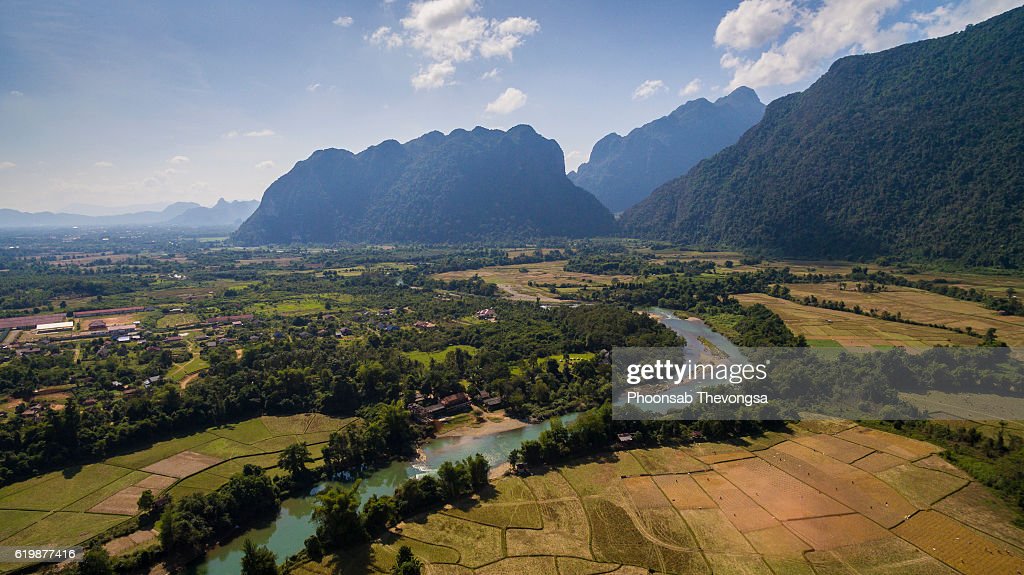 Vang Vieng is a tourist-oriented town in Laos in Vientiane Province about four hours bus ride north of the capital. The town lies on the Nam Song River. The most notable feature of the area is the karst hill landscape surrounding the town. Vang Vieng has become a backpacker-oriented town, with the main street featuring guest houses, bars, restaurants, internet cafes, tour agencies, and Western tourists. Attractions of the town include inner tubing and kayaking on the Nam Song River

As Vang Vieng beautiful scenery lies down, river, mountain and waterfall become a top list in Vang Vieng. As it said, tourist would like swimming down to Nam Song river with a tube. That’s why it called as Vang Vieng Tubing. One thing that make this Tubing popular is every corner of the river have a lot of club or bar waiting for you to get drunk. People would love to stop at the corner and buy a drink, get drunk in Nam Song river just following where the river take them.

Meanwhile, mountain and waterfall are the best thing tourist ever choose for them who love to hike. Climbing the waterfall or mountain and then flying-fox it from the top and slide down. It is very breathtaking but paid off with all the views. The best way to go there is early in the morning to get the sunrise.

But, following the happiness of Vang Vieng Tubing and Adventure, there’s a lot of accident because of that. Get drunk and drowned from that. Locals have said that tubing and tourism are destroying the town’s culture and encouraging crime among children, while loud music destroys the area’s tranquility. 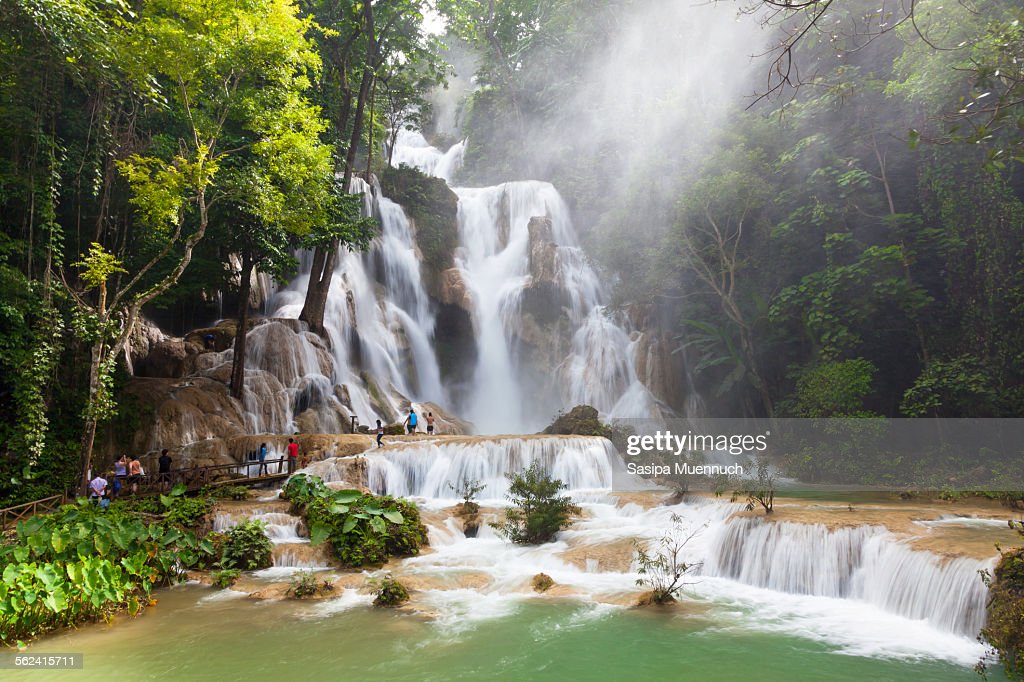 The Kuang Si Falls, sometimes spelled Kuang Xi or known as Tat Kuang Si Waterfalls, is a three tier waterfall about 29 kilometres south of Luang Prabang. These waterfalls are a favourite side trip for tourists in Luang Prabang. The falls are accessed via a trail to a left of the falls. The water collects in numerous turquoise blue pools as it flows downstream. The many cascades that result are typical of travertine waterfalls.

There are trails allowing you to climb up to the top where you can see the stream feeding into the falls and enjoy some more natural pools. Remember to bring the correct footwear as the trails can get slippery and are certainly not recommended for children or the frail. 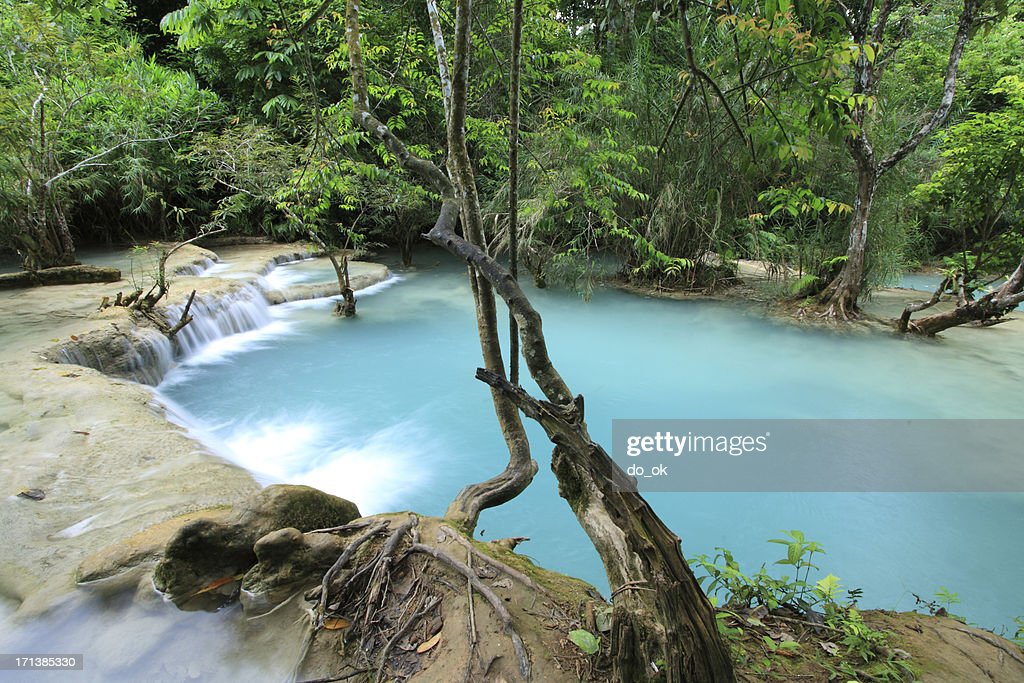 The locals charge a nominal admission fee to visit the site, but it is well maintained with walkways and bridges to guide the visitor. Most of the pools are open to swimming (although at least one is closed as being a sacred site).

Blue Lagoon & Tham Phu Kham Cave
A scenic ride across an unpaved road through the Vang Vieng countryside, through small villages and along rice paddies leads to the blue lagoon and the Tham Phu Kham cave.

A hiking trail on the forested hill leads to the entrance, about halfway up the limestone cliff. The 200 meter climb is quite steep at places; the trail is equipped with handrails at the steepest sections. At the bottom of the track to the cave is the blue lagoon, a beautiful pool with crystal clear waters. The cold turquoise waters provide a chance to cool down and wash of the cave’s dust. Next to the pool is a tree with ropes hanging down from its branches to swing off from and jump in the water.

The Blue Lagoon and cave are located about 30 minutes outside of the town of Vang Vieng. It is possible to get there by renting a bicycle or a motorbike for the day. The way there is a dirt road that can be a bit bumpy, so alternatively you can take a tuk tuk there as well.

Opening hours are daily from 8 am until 6 pm. Admission to the lagoon and cave is 10,000 Kip per person. A torch can be rented at the cave at 10,000 Kip if you want to go past the first chamber. Signs at the cave advertise guides at a rate of 50,000 Kip, which is probably negotiable.

There are few thing you could do in Laos even there’s a lot of things you could explore and much more than the list I made. It just a thing when you’re a perk of being a Southeast Asian, you have a lot of similarity but there’s something different in that. Which is our uniqueness and foreign like to come.

That’s the wrap for Laos!
There’s a lot of thing that you could see in there and see you next week with ‘WHAT’S IN SOUTHEAST ASIA; MALAYSIA!’